Where serendipity has taken us... 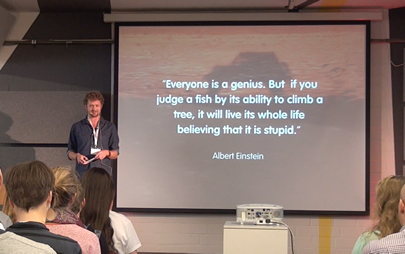 As with most things worth doing, it started as a crazy idea; running our company from a Land Rover was pretty ambitious. Through a deep belief in the idea, and taking the necessary incremental steps, one at a time, we made the whole adventure a reality.

Before we could blink an eye, we were sitting in the Land Rover somewhere in a desert in Peru, doing a call with a client in the US and it felt like the most normal thing.

Exactly a year ago, we had no idea what was going to happen, and no particular goals we were looking to achieve. We knew that doing something like Startup Diaries, would be at the very least quite the adventure, with many unpredictable consequences coming out of it.

And that’s exactly what happened: dozens of new connections, speaking at TED in Bogota, TOA in Berlin, interviews on Deutsche Welle, and more.

One place it led Fabian down, was that to the stage at DNX Berlin. We’ve shared the recording of the keynote below and we hope it will resonate with you, perhaps inspiring your own adventure.

Get our monthly updates!
It’ll be like you are there with us.